Why do you need to touch type in the 21st century? 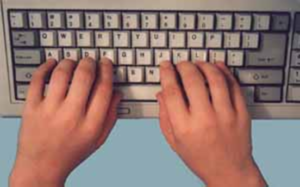 I was asked recently why was there still a need to touch type in the 21st century. It was a good question and with the advent of new technologies, such as smartphones, tablets, hybrid laptops and text to speech. Maybe there isn’t such a need for touch typing or was there?

Touch typing (also called keyboarding) is typing without using the sense of sight to find the keys. Specifically, a touch typist will know their location on the keyboard through muscle memory. In today’s competitive job market, it is important for anyone applying for any job that involves the use of computers to learn to touch type. And it is not stretching it to suggest being able to type fast without looking at the keyboard is a 21st century basic skill in computers.

The main advantages of touch typing are as follows:

A touch typist does not need to move the sight between the keyboard (that is obscured with fingers and may be poorly lit) and other areas that require attention. This increases productivity and reduces the number of errors.

Overall the payback from learning how to touch type outways the inefficiency of other input methods. Once you have the skill it will stay with you for the rest of your life. So get touch typing. Why not try out a free trial of our typing programme Typehands, at http://typehands.com/UserPages/Login.aspx Happy typing!